We Are Deathless: An Afropoetry Anthology

By O-Jeremiah Agbaakin
The hallmark of the Baroque aesthetic was its emphasis on and the intensity of the present moment captured on the canvas. There is so much tension, energy, passion, as well as the manipulation of the angle of light and the contrast between shadow and lighting, called the chiaroscuro. This is in a sharp contrast (excuse the pun) with the earlier Renaissance art movement where emphasis was on the action before or the action beyond—a sort of transfiguration or prefiguration. So why am I talking about Europe’s art history instead of diving into the heart of this beautiful anthology that is worlds apart, Afrocentric even? In Onuoha Munachiso’s poem, 1970, we are easily deceived by the title, primed to muse on an aftermath, a transfiguration, that is, of the end of the Nigerian Civil War.

I have an unwritten rule for prefacing that one ought to subdue the impulse of paying too much attention to the early poems in the anthology or journal at the expense of others. The opening poems already have the advantage of position. But it is often onerous to determine the intention of both the artists and editors in an anthology. In this case, the opening poems can be the compass to point us towards that intention or agenda, especially where the title of the project might be too general. Munachiso’s 1970 instantly lures us into an aftermath, the calm-after-the-storm, almost reminiscent of the reductive rhetoric of Yakubu Gowon’s “no victor, no vanquished.” The first line goes “you have just put to bed”. The poem immediately does the Baroque thing, focusing the lens on specific moments, using vivid image, and animating us instantly like “a dancing mural of delight” (Muhammad Ali at the Ringside 1985, Wole Soyinka). Thus, in the aftermath of a birth, “screams / were lullabies”.

One way of deflating the Baroque argument is that even these tense moments are captured in the past (the prefiguration), not just the historically-past as we may know it as readers, but also because the speaker catalogues them in the past tense. The speaker says “your child did not come / when guns shed their bullet”, “Boys fought their battles with / guns”, “bomber sirens were alarms” and so on. But towards the end of the poem, we find a sense of the present (tense). “Behind enemy lines / Hope explodes”. The tension dissipates again towards the aftermath “only in the cool grey of the evening do we find / peace”; teaching us a “stillness the water cannot mirror” as in Semilore Kilaso’s poem, a ki᷆ i᷇ ku᷇; rooted in such a rest that resists earlier agitations, “a rest from orchestrating massacre”. This inconsistency within the poem is not a blemish on its aesthetic or power of affect but rather a confirmation of the psyche of the artistic process, one that is weighted by control and chaos. The poet insists. The poem resists. And between them is the language that spectates and participates, charged with tension that enthralls us.

This has helped to train my curiosity on how to read this anthology. One should be suspicious of categories because they can exclude even as they try to include. This anthology is inclusive and expressive in matters of theme, style, range, and sensibilities but also cohesive. This cohesion is a victory of the editors’ creativity. In Ojo Olumide Emmanuel’s Ghosts of the Sea... Ashore, we start to grapple with migration, something else entirely. It starts, “let the count begin” as if instructing the woman in Munachiso’s 1970 during her childbirth like a midwife saying “push, push”. I like the anaphora of “this count” throughout the poem as if the invocation has not materialized yet and we just have to flip the pages when we are done with the poem.

The speaker presents the images of dead migrants, “who met wreckage / in search of peace”, whose prayers are “dashed out by storms”. The language itself is rich with the contrast between reality and the subternatural as the “ghosts pick(ing) new bodies / for another voyage / to the land they seek / beyond the sea”. Many things are happening here at once. We experience a surrealistic imagery that is in touch with the reality of the trauma of displacement. We also experience a reincarnation of the ‘akudaaya’ in Yoruba ‘mythology’ where ghosts migrate to find new bodies. And we also see the spiritual journey of the soul on its way to heaven.

Most of the poems in this anthology are outward-looking. In a time of “ultra-confessional” poetry, I find this both out of time and intriguing. Where the poems look inward, they are very powerful as in Shirley Jones Luke’s Trauma where “a black bullseye / marks the spot where the surgeon had cut into my black body”. The poem immediately takes to another plane that transcends the speaker “I”. Trauma is stylistically different from other poems as it uses the caesura and white spaces on the page, representing the violence and violation of the black body until “i(t) breaks down” at the end. Adeola Juwon’s Your Skin is Your Sin, Boy immediately follows Luke’s cue as the boy “wear(ing) the / face of night”. There is an ambiguity that leans towards a beautiful ambivalence in the opening lines. Is the night’s (face) being effaced “worn” by the boy? Is the night an object of the black power? Or does he just wear the face of the night as in complexion?

The ambivalence repeats itself as fear starts “pumping in his heart”, pumping as in empowerment. Fear as life. And not life as fear. The cruelty comes clean as the boy starts “jogging to / his death” and comes “under a knee” The anthology is an excellence in structure, a masterclass on how to organize your first book. The migration trope is never a monolith, very expansive in breadth. In Ọlátúndé Àyìnlá’s Portraits on the Ocean’s Wall, we experience the horror of a forced migration and displacement that is different from Emmanuel’s poem, (almost reminiscent of the Transatlantic slave trade) where “two hundred humans (were) thrown overboard / like confiscated goods”.

Again, we come across the sort of logic behind the anthology, which is a restless cohesion as Kabura Zakama’s Siegethreads between geographical Sahara to a psycho-mythical Atlantis, toiling to be transfixed in place. In Thanni’s Portrait of meaning as a horseman, “words are never by themselves”.

Praise Osawaru’s first homecoming immediately heeds the warning of the speaker’s mother in Thanni’s poem, “if you leave, you will never return” as “the bus vomits him into the city of Benin, where he traces his lineage”, tracing back towards the Homeric legend where Achilles repeats his mother’s warning that if he holds out there and lays siege to Troy, his journey home is gone. While structuralism may be out of literary fashion, one must commend the editors for exploiting one of its relics. The organization and cohesion of the poems in this anthology is impressive. The poems speak to one another and listen to one another. Individually, they are brilliant and I feel fortunate to have had a first... or second crack (I am not sure of my position as a voyeur) at the poems before you, dear readers. You can take pleasure in the fact that my eyes cannot wear off its essence, and when the pathos in some of the poems grips you, as when we read Ayomide ‘Wes Oriolowo’s A Black man’s Freedom poem to his child where “gravity will not be the only force / pulling you towards the ground” or Goodenough Mashego’s black Monday which talks about Namibian massacre, do not resist the tears from your eyes for even the water cannot, as Joseph Hope writes in Regenerate, “wash this off ”. Despite the emotional journey here, there is a sort of reclamation of the black body that embodies this anthology as a whole as Timi Sanni writes in Undying that “Every black man can breathe / we’re sons of s᷂a᷆ngo᷇ / we even breathe fire in our fury”. I find it poetic that Tukur Ridwan’s The 100th Poem comes toward the end of the anthology as the speaker writes “I intend to keep it 100” as if to say we are nearing the end. I leave each of these poets to the mercy of your empathy and imagination. 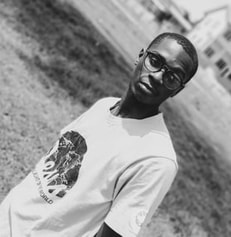 Wale Ayinla is a Nigerian writer.

​He is a staff reader for Adroit Journal. A Best of the Net and Best New Poets Award nominee, & in 2019, he was a finalist for numerous prizes which include the Brittle Paper Award for Poetry, and his manuscript, Sea Blues on Water Meridian was a finalist for the inaugural CAAPP Book Prize. 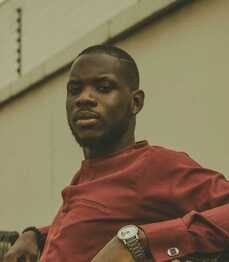 Kanyinsola Olorunnisola is a poet, essayist and writer of fiction. His work has appeared or is forthcoming in Popula, Gertrude, Barren Magazine, The Account, Jalada, Bakwa, Bodega and elsewhere.

​His debut chapbook, In My Country, We’re All Crossdressers, was published in 2018 by Praxis.

His manuscript, The Negroverse Theory, was a finalist for the 2020-2021 Glass Chapbook Series. Among others, he won the 2020 K&L Prize for African Literature, the 2017 Fisayo Soyombo National Essay Prize, and was shortlisted for the 2019 Koffi Adddo Prize for Creative Non-Fiction. ​